Lighthouse and the coast to La Petite Folie

As with Corblets Bay the north-eastern corner of the island was not heavily defended directly. The main support came from the Flak battery at Mannez Garenne and the M19 mortar at Stp Steinbruch. Stp Hummerfeste was erected around the lighthouse. It was armed with a 4.7 cm FPak 36 (t) in a Vf casemate and another Pak gun in open position, probably a 3.7 cm PAK 36. A searchlight shelter was built on top of a small hill west of the lighthouse. Except for the searchlight and personnel shelter and a Mg position in a wall everything has been demolished. Only the basal slab of the 670 (which was never completely built) can be seen today. Further east along the coast one will find Fort Quesnard which became a 20 mm Flak battery (Dachsfeste). It's privately owned today so it ca not be visited but from the outside you can see some Flak emplacements and small shelters. South of this fort at the tip of the island, near La Petite Folie, you will find a small resistance nest consisting of concrete lined trenches, a small shelter and several weapon positions. 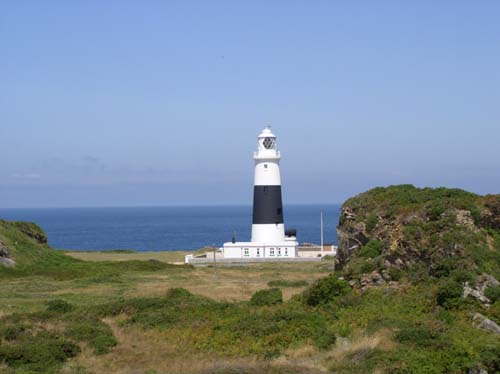 The lighthouse of Alderney.