Ra 277. This full granite island has two major hills. One of 38 meters high in the east; the western one measures 37 meters high. A beach on the landside of the island has a small ramp, which makes it possible to embark from little ships. In 1942 the Germans decided to build a naval coastal battery on the island. In August the number of troops was over 350 men, of which 70 were Italian. The main armament was a total of six former French railway-guns, caliber 19,4 cm, which were fixed in open emplacements. Each hill had 3 of these guns and each piece had its own ammunitionbunker (S 302) and personnelshelter (635 or 622). The batterycontrolpost (M.A.A. 608)was built on the western hill, probably because this waterway was the main entrance to the port of St Malo. The whole island had its own AA gun battery (Alarmflakbatterie) with 6 guns of 75 mm and several 2 cm guns. A 15 cm gun for firing flares was placed in a bunkertype M 158 in the middle of the island. The crew needed drinkingwater, but there was no freshwater installation on the island. Normally the water was daily brought by ship. A plan for building a freshwater installation in an underground cave was made. The entrance of this tunnel can be found near the fire control. The technical equipment arrived on the island, but was never installed. Some remains can be found next to the Leitstand. Due to the fact that the guns were placed in open emplacements, with the ability to fire over 360 degrees, the battery had a great impact on the battle for St Malo. After the liberation of St Malo, on the 18th of August 1944, the island did not surrender and stayed a threat to the allies until the capitulation on the 2nd of September. During that battle all kinds of allied weapons were used. Two battleships with 38 cm guns, the "Malaya" and the "Warspite" fired from the seaside. Fieldbatteries with 15 and 20 cm guns attacked the island from the landside. From the third dimension, heavy and light bombers dropped tons of bombs on this small piece of rock, using phosphorus and the experimental napalm. The wounded were treated in old French underground corridors (former ammunition storages). Most caves are heavily damaged and unreachable now. Walking on the island, you see the great amount of craters caused by bombs and grenades. However the total damage inflicted to the bunkers is minimum. Two personnelbunkers, which could be firied upon from the mainland, have lost there entrances and one has serious damage inside. Some of the big guns were damaged in the battle, others were self destroyed just before capitulation. One gun is still standing upright; this demolition order was never executed. In summer you can visit the island with a small ferry, which leaves at Dinard or near the old town. Since 2006 only the beach is free to visit. The rest of the island has been sealed of with a big fence and clear warning signs. 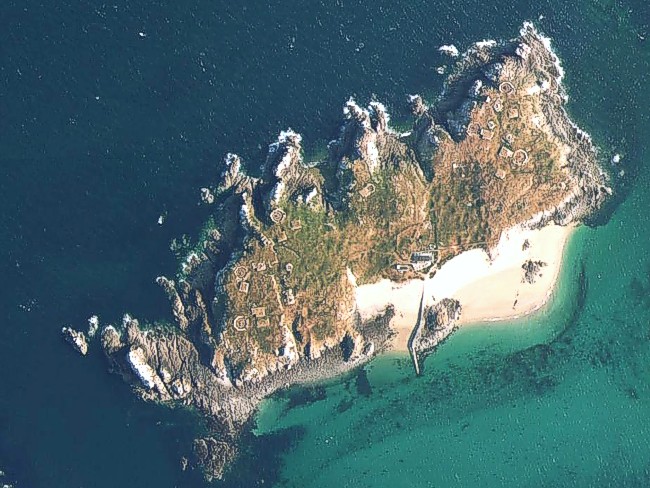